New edition of the ultrarealistic simulator of today’s world where you play as the head of state or as the opposition! Major developments: the war in the Ukraine and all of its consequences, conspiracy theories, fake news, interference by secret services, animal welfare and climate objectives.

With the war in the Ukraine, the planet is in chaos and nothing will ever be the same again. What’s more, there is the threat of global warming, the lingering Covid epidemic along with the risk of new variants, inflation and increased prices on the planet’s key resources.

Alongside the base game mode, which allows you to play as any head of state or opposition leader in the world controlling one or multiple nations, the 2022 Edition offers multiple scenarios.

In the Ukraine scenario, save the country by playing as the Ukraine and one or more NATO countries, by resisting the advance of Russian tanks, by supporting the Ukrainian army, by urging financial sanctions against Russia, by accepting refugees, by making the Russian president unpopular in the eyes of the people or by influencing China to officially oppose the conflict, all while avoiding escalation.

The scenario on global warming involves adjusting your goals for reducing CO2 emissions. Climate Change Conferences (COP) have been added. You can also influence other countries to go further in their goals, with the artificial intelligence of leaders simulating their behavior on the subject, ultimately allowing you to see the real development of worldwide climate change up to the year 2100.

In the &quot;Animal Welfare&quot; scenario, your objective is to become one of the most honorable countries in the world regarding animal rights. To do this, you will have a specific budget and an arsenal of legislation on hunting, animal rights and various other regulations (bullfighting, production of foie gras, battery farming…).

The &quot;French Elections&quot; scenario allows you to play as any candidate in the French election in April 2022.

Besides these scenarios, the game also has new features including: simulating the appearance and development of conspiracy theories with new budgets and actions on the internet and social media, inclusion of fake news with the possibility of combating them or creating them, the development of secret services abroad along with the manipulation of social media and improvements allowing the overthrow of a foreign head of state, management of Covid in 2022 with vaccine boosters and the simulation of new variants, the development of garbage recycling along with a new tax on the use of plastic packaging, the addition of military battle robots, new SMR nuclear power plants, new music awards (Eurovision, Grammy Awards) and sports (eSports, MMA) and numerous improvements on the God’n’Spy add on, including the detailed calculation of the level of dictatorship in a country.

In the Ukrainian conflict scenario, the player can play as the Ukraine and one or more NATO countries by resisting the advance of Russian tanks, by supporting the Ukrainian army, by urging financial sanctions against Russia, by accepting refugees, by making the Russian president unpopular in the eyes of the people or by influencing China to officially oppose the conflict.
The simulation of the conflict required the development of new features and expansion of various aspects: access to allies’ bases, providing weapons, calculating the losses and costs of the war, a peace treaty with the division of the conquered regions, impact of the loss of soldiers on popularity, the behavior of AI countries in wartime conditions (NATO’s decisions, decisions for general mobilization, decisions to enter or leave a conflict…), better inclusion of economic embargoes and their impact on prices, implementing financial sanctions and their consequences and the possibility of influencing AI leaders so that they also implement them, accepting refugees, exclusion and boycotts of sports or cultural events…

In normal game mode, all countries are playable, beginning with the same military context military and events as in the real world.

Various conspiracy theories can appear in a country depending on numerous factors, especially the level of control of social media. The player can launch information campaigns and deconstruction campaigns to destroy them, to try to influence public figures who are passing along these theories to abandon them, or to take more drastic action on controlling the internet.
With secret services, the player as head of state can act abroad, disseminating theories in enemy countries, and act at home, instigating fake news about characters deemed hostile.

In the 2022 Edition, the player will be able to truly contribute to the fight against global warming.
With the simulation of the Climate Change Conferences (COP), it will be possible to modify goals for the reduction of CO2, participate in deciding on the Green Climate Fund, intended to help developing countries, and most of all, influence other countries to do more in their efforts with an AI system setting the objectives to reach for all countries and the actions and legislation to implement. Finally, the player will be able to follow the global warming trends in a precise and detailed manner up to the year 2100.

All the countries of the world are now rated according to their efforts in animal rights. A dedicated budget and an arsenal of legislation are available to the player to advance their country: regulation on hunting, recognition of animal rights, position regarding bullfighting, the production of foie gras, battery farming, whale hunting, the testing of cosmetics on animals, possessing marine mammals at aquariums or wild animals at circuses, dog fighting, raising animals for fur…
A specific scenario allows the player to become one of the most honorable countries in the world in regard to animal rights.

&quot;Baden’s Challenge: Three Years to Succeed&quot;: this scenario puts you in the shoes of the American president with the goal of implementing all the reforms you promised by the end of your term.

The &quot;French Elections&quot; scenario allows you to play as any candidate at the start of an official campaign in the French election in April 2022.

• Development of secret services: new budget and management screen with records on specific countries and the possibility of multiple objectives per spy network, stronger impact on the popularity of foreign heads of state (who could be overthrown or trigger new elections) and manipulation of social media.
• Recycling of garbage: addition of a new global threat, the increase in garbage and the integration of a tax on the use of plastic packaging.
• Management of Covid in2022 with vaccination boosters and simulating new variants
• Display on the rate of popularity for AI heads of state
• Battle Robots: Development of this new highly sophisticated weapon. These autonomous or controllable robots can lead ground operations without risking the loss of soldiers.
• SMR Nuclear Power Plants: addition of these small power plants at a lower cost provides an alternative to &quot;decarbonate&quot; electricity with the possibility of construction contracts (buying or selling) with foreign countries.
• God’n’spy: a detailed chart on the level of democracy/dictatorship of countries, the possibility of deleting a played country, controlling inflation, expediting the recruitment of personnel, eliminating the limitation of construction tied to the available workforce.
• The possibility of renaming places on the map
• Construction: fixing a maximum number of constructible buildings depending on the available workforce and the possibility of automatically starting new construction projects once previous ones have been completed
• Expansion of choices when changing a political party: regionalist, ecologist, anti-globalization and religious parties or parties not existing in the country.
• Addition of musical awards: Grammy Awards and Eurovision Song Contest
• New types of sports: eSports and MMA
• New achievements 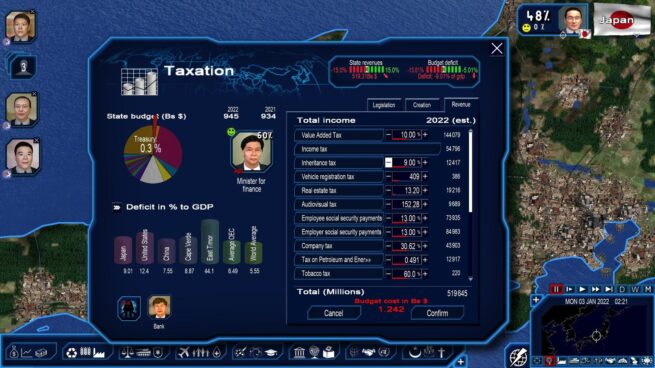 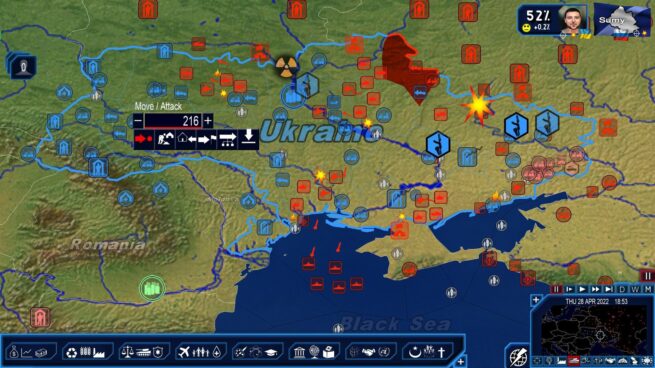 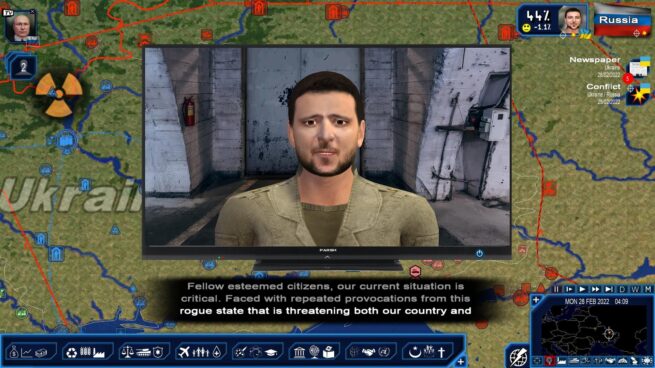 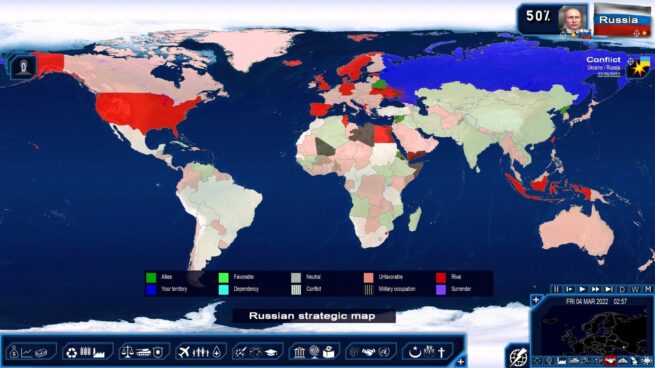 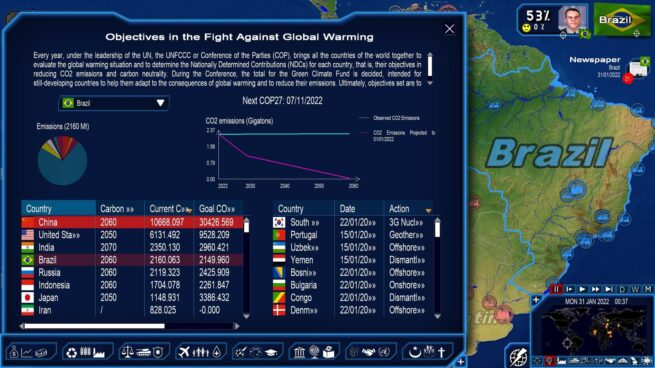 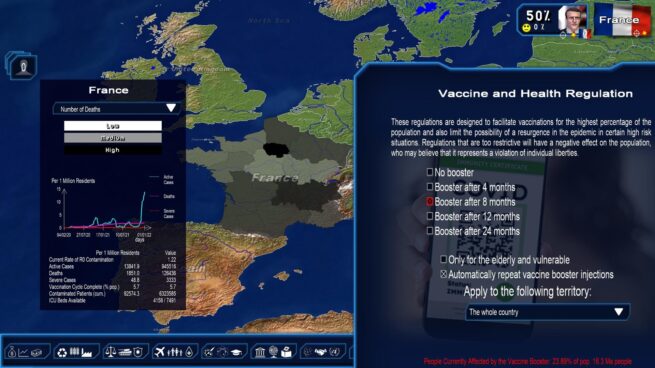 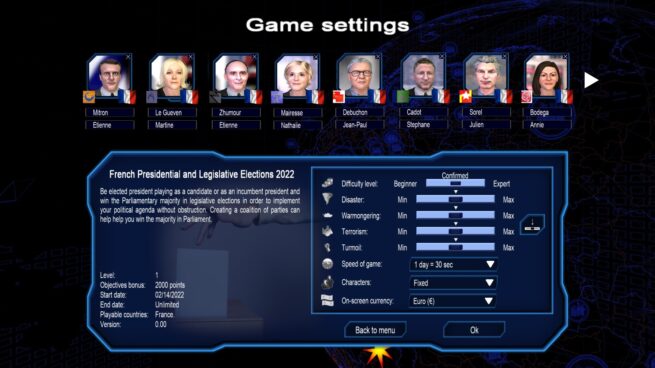 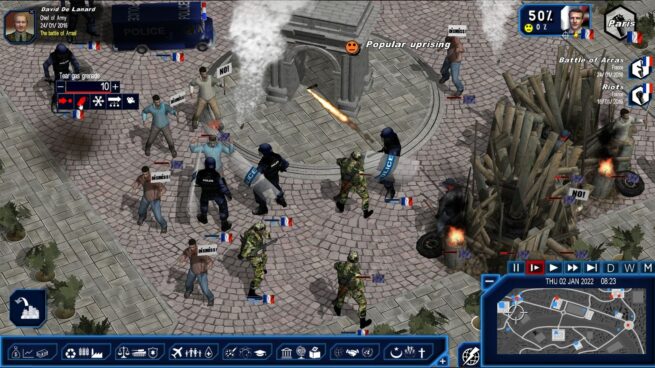 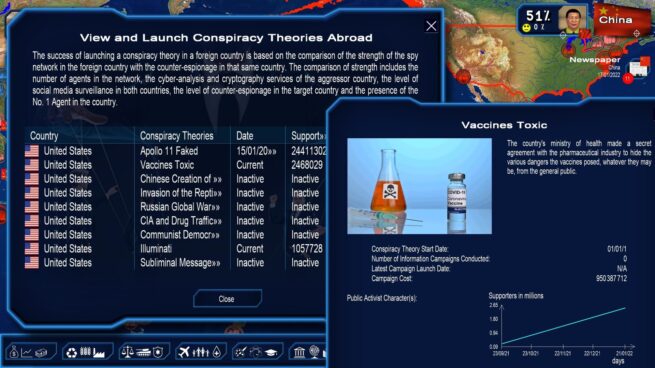 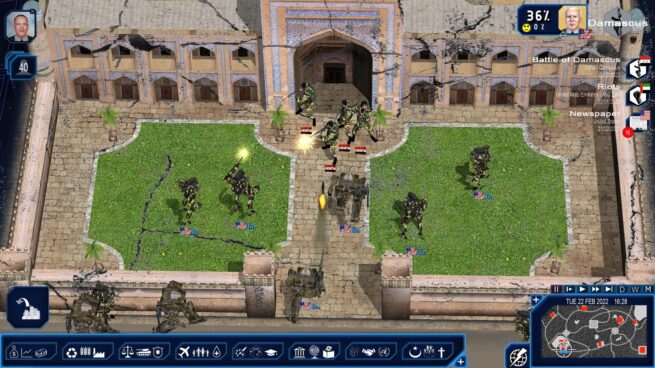 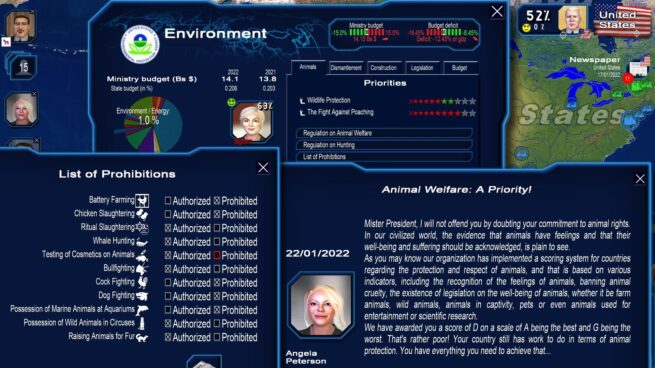 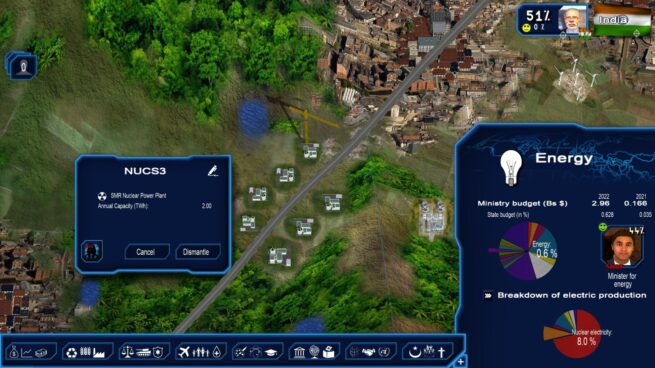 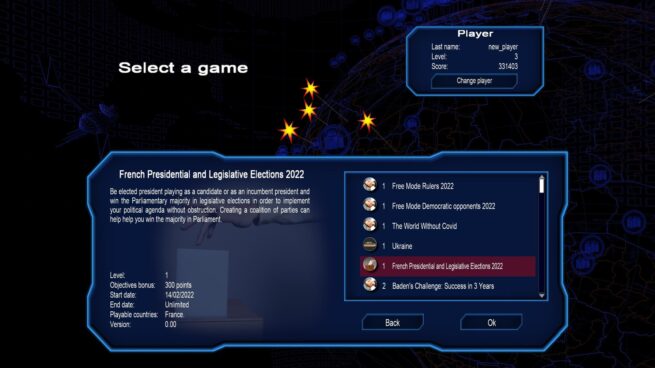 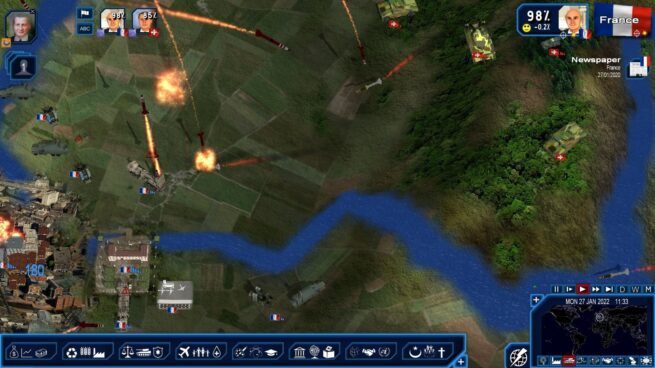 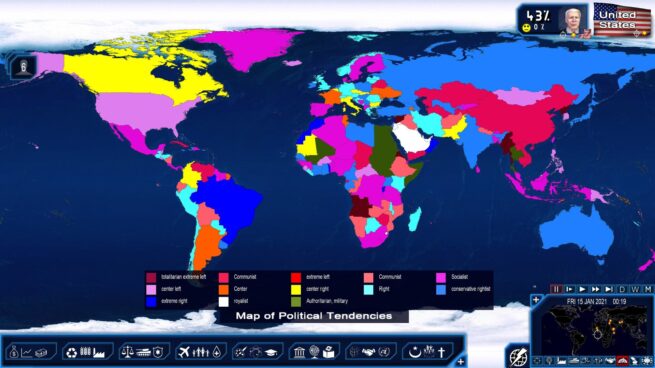 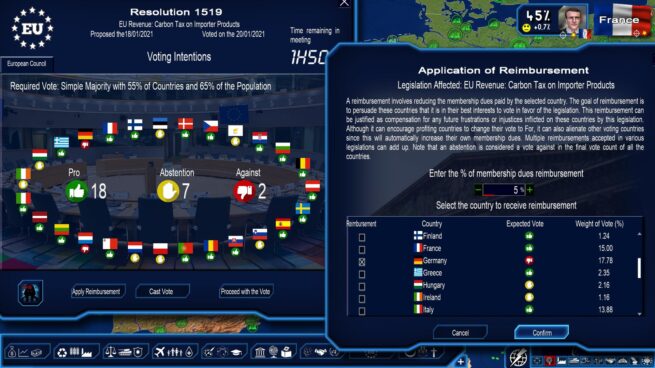 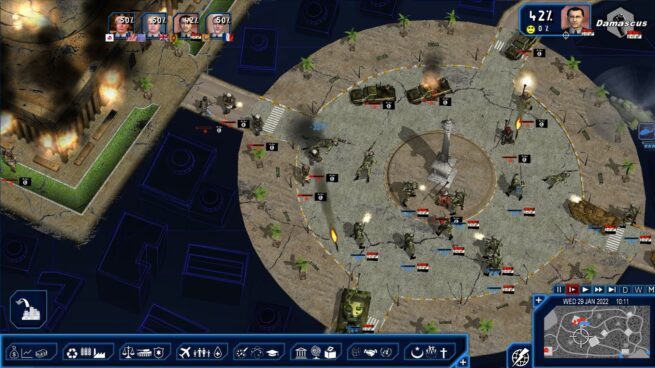 Just remember about checking our site from time to time to be sure you’ve got the latest updated version. If the game will be updated you will can download Update for Free 🙂